The Home of the Vice President of the United States

WHAT’S IN A NAME?

Historically, the residence has been referred to by using the name of its tenant: the Superintendent’s House, the Admiral’s House, Admiralty House, the VPR (vice president’s residence), or simply just the vice president’s home or house. The Mondale Family Cookbook, which included recipes that Joan Mondale used while living at the home, referred to the home as the “Vice President’s House, Washington, DC 20501” via an illustration for all of her menus, along with calling it simply the “Vice President’s House” throughout the book. Dick Cheney, in Cheney, One on One, simply referred to the home as the VPR.

Other residents, such as Barbara Bush and Tipper Gore labeled it more informally, “the house” or simply “the home,” yet one thing they all seemed to agree on was how privileged they were to call Number One Observatory Circle their home. William Mondale, son of Vice President Mondale, remembers how it was such an incredibly big and beautiful house compared to their modest living quarters when his father was a senator. Mrs. Gore called the home an “amazing place.” And Barbara Bush fondly recalled how after her husband was sworn in as vice president on January 20, 1981, they retired to the home for a nap, then “awakened and looked out our bedroom window to see lighted fireworks on the horizon . . . it was magical . . . that view, which we had only in the winter, never failed to thrill us.”

A HOME FOR THE OBSERVATORY SUPERINTENDENT

Superintendent Captain Frederick V. McNair, the man responsible for overseeing the care and operations of the Observatory, was the first superintendent to occupy the Superintendent’s House, hence the name. McNair had overseen the planning and movement of the Observatory to its new location, so it only seemed fitting that he would be its first resident. He had also required a specific number of additional dwellings for resident astronomers, which the Navy agreed to provide. In all, twelve US Naval Observatory superintendents resided at the home from 1893 to 1927. McNair was soon followed by Commodore Robert L. Phythian. Little did these men know that the home was “destined to have a storied history, later becoming the residence for the vice president of the United States.”

The man responsible for designing the home — which cost approximately $20,000 to build — was architect Leon E. Dessez (1858 – 1918), an actual resident of Washington, DC who had worked on plans for the Washington Monument, along with working at the Navy Yard, and also designing homes in the District, Maryland, and Virginia. Dessez also designed other notable buildings, such as the St. James Episcopal Church in Leesburg, even a firehouse on 12th Street, according to noted author Gail S. Cleere. As for the architectural design of the Superintendent’s House, it was a Queen Anne-style home, a form of architecture popular in the United States from roughly 1880 to 1910. Common traits for such a home included a front-facing gable, a porch covering part or all of the front facade, including the primary entrance area, a variety of wall textures, classical columns, bay windows, prominent chimneys, and wooden or slate roofs. Other features typically included a grand entry hall, often complete with a fireplace and a staircase — in essence, a home that exuded grandness and distinction.

The residence is situated on twelve of the seventy-two acres that comprise the US Naval Observatory. Visually, the home is three stories, brick and wood framed, rather compact — approximately 39 x 77 feet — with floor space noted at 9,150 square feet, and total gross square footage of 11,373 square feet.48 For years, it retained a dark reddish-brown exterior, which thankfully was changed in 1961, and again in 1963 when the home was painted white with black shutters.

Years later, the shutters would be painted green. The ground floor consists of a reception hall, living room, sitting room (now commonly referred to as the library room), and garden room (also known as the sunroom), as well as a pantry and the often-photographed and well-publicized dining room. The second floor has two bedrooms, one of which is a large master bedroom, along with an office and a den, with the third floor containing four additional bedrooms — three of them quite small as they utilize the actual dormers of the home. The kitchen, along with staff quarters and other operations essential to the home, are located on the basement level.

To this day, Number One Observatory Circle is still the official “temporary” residence of the vice president of the United States, with no permanent residence ever finally decided on, at least legislatively. Geoff Chester, Public Affairs Officer at the US Naval Observatory, keenly pointed out that a possible permanent site had been chosen at the Observatory, complete with an actual ground marking, yet nothing has come of it since. It seems that our nation’s second-in-command will forever reside at the official “temporary” residence for the vice president of the United States. 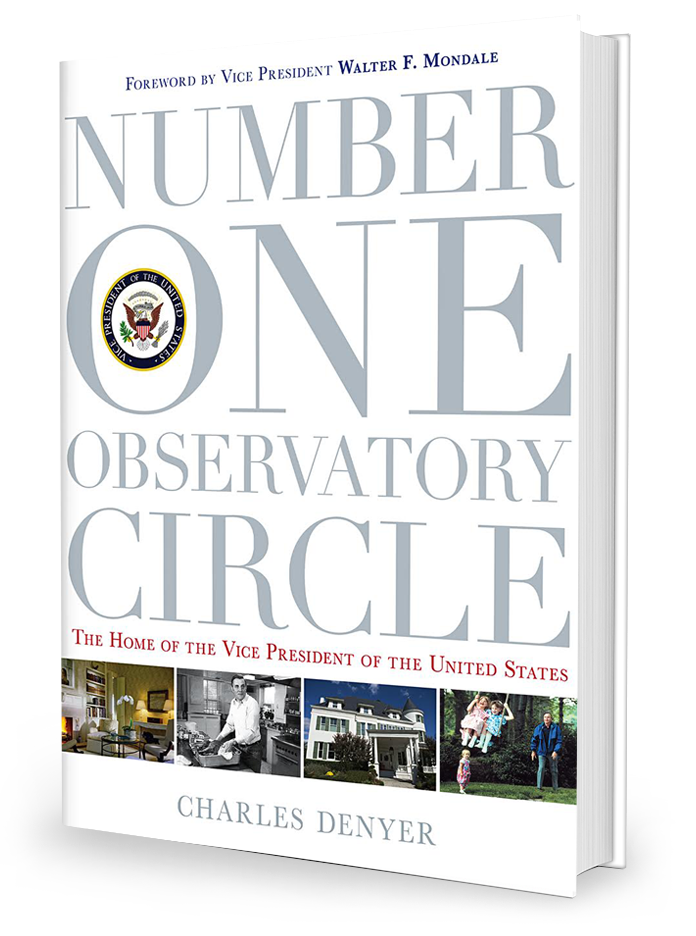 Purchase at Amazon.com
Contact Us for a Signed Copy

“It didn’t work out for them, and I’ll bet you they didn’t know what hit them…this is not what they planned on”, chuckled Mondale.

-Vice President Mondale on Secret Service Agents pinning his son’s friends down who jumped the fence to enter the grounds of the vice president’s residence.

“After becoming President-elect in 1988, I distinctly remember riding in the limousine with Mr. Bush as we travelled through downtown Washington where he stated that he almost wished he could continue to live at the vice president’s residence”.

“Cheney’s grandchild Kate Perry thought she was flushing the toilet as she hit a panic button that was in the bathroom. It brought the Secret Service running, but we all had a good laugh when they realized what she did.”

“I walked into the vice president’s residence only to see dad and his closest advisors in the dining room, looking grim and pale faced. I just went straight upstairs to my bedroom and very shortly thereafter the news came out and I put two and two together about the failed Iranian hostage rescue mission.”

“Charles Denyer has taken on the task of shedding a bright light on a subject of which few Americans are even aware, the Vice President’s house in Northwest Washington. The history of the house itself, the comings and goings of heads of state, artists and events of diplomacy are surrounded by the warmth and character of the families it has housed. It has been my pleasure to have been part of this important project.”

“Charles has done an extraordinary job of capturing four decades of history on one of America’s most treasured homes. A must-read book for those wanting to learn more about the official home of the Vice President of the United States.”

“Charles has done a great job researching and interviewing many people including former Vice Presidents and Vice Presidential staff to provide us with a comprehensive look at the home of the Vice President of the United States. I personally have many memories and have taken countless photos in the Vice President’s home and am honored to have been a part of this historic book project.”